LNG becomes the most important maritime market in 2022

Russia’s Gazprom says it has cut gas supplies to Latvia

Vladimir Mau was re-elected to the board of Gazprom last week. The liberal economist’s seat at the Russian gas monopoly, one of the state’s main assets, suggested Mau was still in favor with the Kremlin.

The suggestion was wrong.

Hours later on Thursday, Moscow police said they arrested Mau for fraud, a sign that Russian wartime repression now extends even to his loyal servants.

Mau, who denies the charges and is under house arrest until August, is not a dissident. The rector of Russia’s largest university, the Russian Presidential Academy of National Economy and Public Administration (Ranepa), signed an open letter from the heads of 260 universities pledging to “gather around the president” after Vladimir Putin’s invasion of Ukraine.

Instead, Mau, 62, tried to reform the system from within. A special Kremlin-supervised Ranepa program has trained 46 regional governors since its inception in 2017.

The university also hosts an annual town hall for Russian technocrats to complain about the country’s economic stagnation.

Mau’s arrest means even constructive criticism behind closed doors is prohibited, according to Kirill Rogov, a political scientist who previously advised him on an economic program for the Kremlin.

“It shows how ruthless the regime is,” said Rogov, a visiting scholar at the Institute for Human Sciences in Vienna. “Mau had a good personal relationship with Putin, but that means nothing.”

Many members of Russia’s technocratic elite oppose the war in private but are reluctant to talk about it in public, according to former officials and high-ranking businessmen. Some quietly quit their jobs. A few prominent liberal figures have been subject to reprisals.

Anatoly Chubais, who quit as Putin’s climate adviser after the invasion and another veteran of President Boris Eltin’s economic team in the 1990s, is now facing criminal investigation.

“For the first few months, they paused the inter-elite repression,” said political scientist Ekaterina Schulmann. “Obviously the main task was to show a united front and an elite unit – that they didn’t run away or start chewing on each other.”

Now Mau ‘is the first major character to be arrested [in several years]said Schulmann, who left his post at Ranepa in the spring for a one-year fellowship at the Robert Bosch Academy in Berlin.

“And what’s symbolic is that they weren’t afraid of a major public outcry.”

Mau’s disgrace is a further indication of how far the economic order has changed in Russia since the invasion and retaliatory Western sanctions that froze half of the country’s central bank reserves, have it cut off from the US-led global financial system and devastated imports. and foreign investment.

Instead of the market reforms advocated by Mau, the Kremlin is expected to play an even bigger role in Russia’s already state-dominated economy. On Thursday, Putin nationalized Sakhalin-2, a Gazprom joint venture in the Pacific with Shell and two Japanese groups that is the first major company to come under state control since the start of the war.

On the same day, the Russian cabinet presented a bill that would allow the government to force companies to accept military contracts and to have their employees work outside normal hours to “temporarily concentrate their efforts” in favor of the State.

“They put the economy on a mobilization path,” Schulmann said. “The president said we don’t want to isolate ourselves and move to a planned economy because it’s humiliating. Now it has started to crack,” she added. “They institutionalize a non-market economy.”

During the first decade of Putin’s rule, “systemic liberals” like Mau were as comfortable as siloviki strongmen with roots in the Soviet security services, even though Putin described the “shock therapy” reforms in the 1990s as a traumatic lost decade.

“Systemic liberals” held prominent positions in his cabinet and ran key state corporations, allowing him to balance the statist leanings of his former KGB colleagues.

“10 years ago, there were a lot more people in Putin’s establishment and more who were fully progressive – not so much liberals in the classic sense as modernization-oriented people,” said former director Viktor Vakhshtayn. from Ranepa’s Faculty of Sociology.

In 2011, when Putin spent four years as prime minister, Mau and Yaroslav Kuzminov, director of the Higher School of Economics, spearheaded an extensive research program aimed at charting a 10-year trajectory for economic policy Russian.

“In every political meeting where you needed an economic opinion, Mau or Kuzminov would most likely be present. It was very clear that he was one of the two leaders of economic policy in Russia,” said Sergei Guriev, who advised Putin’s deputy chairman, Dmitry Medvedev, as he headed Russia’s new economic school.

Their influence, however, went no further. Mau and Kuzminov’s main proposal was to shift spending from the Russian military and police to its chronically underfunded education and health sectors.

Instead, Putin annexed Crimea in 2014 and orchestrated a separatist proxy war in Ukraine’s eastern Donbass region, beginning a gradual process of repression, militarization and economic isolation that culminated in the invasion at large scale this year.

The war put Mau, who still sought to find a modus vivendi with the Kremlin, at odds with his most ardent critics among his friends.

“You had to be liberal, but not too liberal. He would hire some people, but not others. He was very cautious and scared after 2014,” said Rogov, who left Ranepa in 2014.

“I said some pretty strong things, and Volodya was afraid to do it in public. He thought it would come back to hurt him.

Academics were not the only targets of pressure either.

When students joined protests led by Russia’s leading opposition activist Alexei Navalny in large numbers in 2019, the Kremlin began cracking down on dissent in universities. Some student protesters were expelled. Some teachers have lost their jobs.

In the increasingly narrow window of criticism of Putin, Ranepa still appeared to many as an oasis of free thought – especially as crackdowns began at other universities, such as Kuzminov’s Higher School of Economics. .

The Kremlin and the FSB, Russia’s main security service, called him several times to tell him about professors they disliked, according to current and former Ranepa faculty members.

But despite the pressure, Mau “wouldn’t fire controversial professors,” Vakhstayn said. “At most Russian universities, you would be fired for writing the wrong thing on Facebook, no matter how good a teacher you are or how many English posts you have. We didn’t have that. 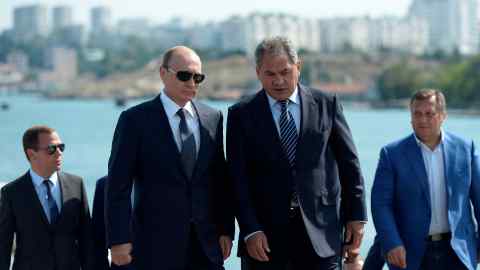 Prosecutors asked Mau to compile a list of protesting students. Ranepa eventually complied, but nothing ultimately came of it, faculty members said. Mau also only signed the pro-war petition a week after it was published, when Russian media noticed that one of his deputies had signed it for him.

Mau’s arrest could spell the end of free-thinking education in Russia.

Kuzminov resigned from the Higher School of Economics last summer. Sergei Zuev, director of the Moscow School of Social and Economic Sciences, was arrested a few months later on fraud charges related to the charges against Mau.

Many academics have left Russia since the start of the war, fearing reprisals for criticizing the war. The government is replacing the standardized European higher education system with something it says will reflect its “national interests”.

But the biggest repercussions could be for “systemic liberals” still working in state institutions, according to Guriev.

Threatened by the liberals, Russia siloviki “Come to Putin and say, ‘Look, these people are against you and they work in government institutions,'” said Guriev, who left Russia in 2013 to escape possible prosecution.

“If I were them, I would run now. But it will be much more difficult to manage,” he said.