US Secretary of State Antony Blinken said on Wednesday that Saudi Arabia was an “essential partner” in countering Iran’s power in the Middle East and helping expand the Abraham Accords, which normalized ties between Israel and the Arab countries.

Blinken was asked about the Biden administration balancing its efforts to push Saudi Arabia over its human rights record alongside the White House wanting Riyadh to help deal with the energy crisis and take action to normalize with Israel.

“When we arrived, President Biden was determined to recalibrate the relationship with Saudi Arabia and to ensure that the relationship served our own interests, as well as our values, as we moved forward, but also to preserve it, because it also helps us accomplish many important things,” Blinken said at a virtual event hosted by Foreign Affairs magazine. “That’s a lot of what we did.”

“Saudi Arabia is an essential partner for us in the fight against extremism in the region, in managing the challenges posed by Iran, and I hope also in the continuation of the process of building relations between Israel and its neighbors near and far through the continuation, expansion of the Abraham Accords,” he added.

Israel has long sought ties with Saudi Arabia. Foreign Minister Yair Lapid said Monday that Israel was coordinating with the United States and Gulf countries on a process to normalize relations with Riyadh.

“We believe it is possible to have a normalization process with Saudi Arabia. It is in our interests,” Lapid told Army Radio. “We are working with the United States and the Gulf States. on this subject.”

“We’ve already said this is the next step after the Abraham Accords, to talk about a long and careful process,” he added, referring to state-backed normalization agreements. States in 2020 that Israel concluded with the United Arab Emirates, Bahrain and Morocco. . Saudi Arabia was seen as giving its approval to the United Arab Emirates and Bahrain to forge ties with Israel.

Israel and Saudi Arabia do not have official diplomatic relations, but secret ties have warmed in recent years. The powerful Saudi Crown Prince, Mohammad bin Salman, reportedly sees Israel as a strategic partner in countering Iranian influence in the region.

Lapid warned that the normalization process with Saudi Arabia will be long and that progress will come in small steps, stressing that both countries have security interests at stake.

“It’s not going to be the same as last time,” Lapid said in reference to how quickly the 2020 normalization deals were announced. “We won’t suddenly wake up one morning and it will be a surprise.”

“It could be that three foreign ministers after me, someone stands on the podium and celebrates that, which is absolutely fine. That’s how you run a state,” Lapid said.

Saudi Arabia has long said it seeks a solution to the Israeli-Palestinian conflict before normalizing relations with the Jewish state.

Lapid’s comments came as dozens of Israeli tech entrepreneurs and businesspeople recently traveled to Saudi Arabia for advanced discussions on Saudi investments in Israeli companies and Israeli investment funds, according to an article published Sunday in the business daily Globes.

Last week, two senior US officials reportedly traveled to Saudi Arabia for secret talks on a deal that could strengthen Washington’s ties with Riyadh while bringing the kingdom closer to normalization with Israel.

According to news site Axios, the trip was part of efforts to finalize an agreement on the transfer of the Red Sea islands of Tiran and Sanafir from Egypt to Saudi Arabia.

The islands feature prominently in the 1979 Israeli-Egyptian peace agreement and their transfer to Saudi control therefore requires some Israeli support. Accordingly, the United States and Israel would push Riyadh to take a series of small steps toward full normalization with Jerusalem.

The Axios report says that among the proposed measures is allowing Israel to use Saudi airspace for all flights, not just travel to Gulf countries, and direct flights between Israel and Saudi Arabia for Muslim pilgrims to Mecca and Medina.

Additionally, a senior Israeli official was recently hosted at a palace in Riyadh for talks on various aspects of security and other coordination, Channel 12 reported last week, without citing a source. The daily Yedioth Ahronoth also reported meetings between personalities from the two countries, without giving further information.

The reports come ahead of US President Joe Biden’s planned visit to the Middle East, which would include stops in Israel and Saudi Arabia, in a stark reversal for the president, who has previously called for making the kingdom an outcast. 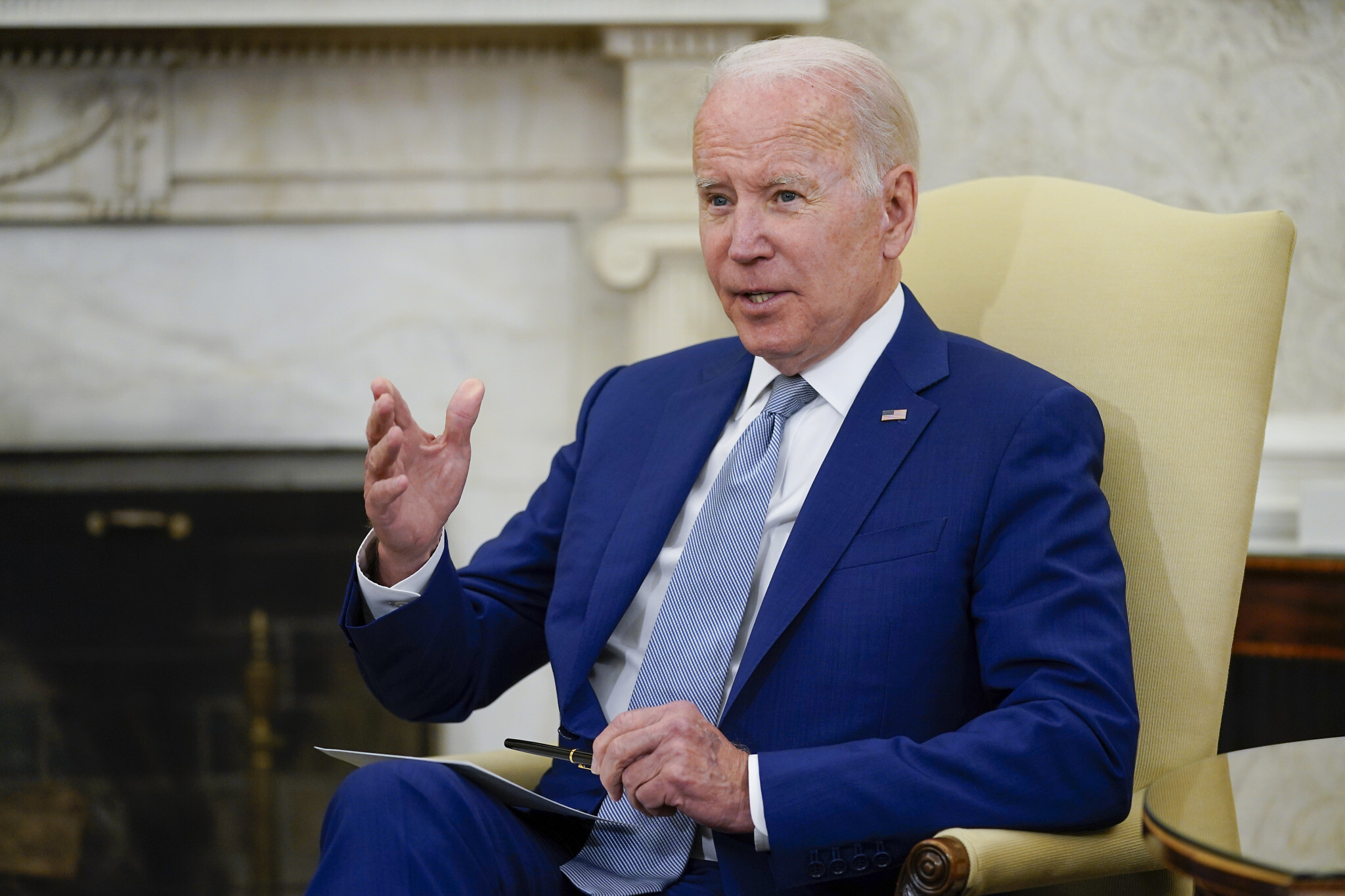 President Joe Biden speaks in the Oval Office of the White House, Tuesday, May 31, 2022, in Washington. (AP Photo/Evan Vucci, File)

Biden reported decision Thursday’s visit came hours after Saudi Arabia addressed two of Biden’s priorities by agreeing to increased oil production and helping to extend a truce in war-torn Yemen. Russia’s invasion of Ukraine has disrupted global energy markets and Saudi Arabia has said it will increase oil production in July and August.

The New York Times, Washington Post and CNN, citing unnamed sources, said Biden would go ahead with the long-talked about Saudi stoppage on the next trip.

CNN said Biden will meet with Crown Prince Mohammed, who is accused by US intelligence of ordering the 2018 murder of dissident journalist Jamal Khashoggi.

Crown Prince Mohammad has also cracked down on dissent in the kingdom by arresting journalists, activists and others, and human rights campaigners have condemned Saudi Arabia for recent mass executions.

White House press secretary Karine Jean-Pierre said she had no trips to announce, adding only, “The president will seek opportunities for dialogue with leaders in the Middle East region.” .

However, a senior administration official told AFP that if Biden “determines that it is in the interests of the United States to engage with a foreign leader and that such engagement can yield results , then he will.”

Without confirming the trip, the official, who spoke on condition of anonymity, said there was “no doubt that significant interests are linked to Saudi Arabia”.

As he ran for president, Biden called for Saudi leaders to be treated as “the pariah that they are” after the ultraconservative kingdom’s friendly relationship with his predecessor Donald Trump.

Trump had largely shielded Saudi Arabia from consequences after Khashoggi, a US resident who wrote critically about Crown Prince Mohammed in The Washington Post, was lured into the Saudi consulate in Istanbul where he was strangled and dismembered.

In a rare interview earlier this year with The Atlantic, Crown Prince Mohammed said if Biden understood him: “I just don’t care.”

“It’s up to him to think about America’s interests,” he said.

AFP contributed to this report.

Talks kick off in Riyadh to strike a trade deal with countries covering £33.1bn of …